Prism at The Hampstead Theatre 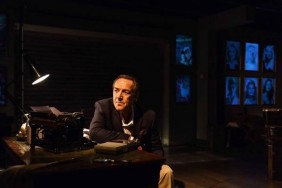 The walls of Jack Cardiff’s studio are adorned by photographs of Hollywood greats such as Katherine Hepburn and Marilyn Munro.


Jacks son is present and listens as his father enthusiastically talks about film and photography, occasionally he disappears into what we think is an imaginary world.
Jacks wife plays along with his apparently demented self as he calls her ‘Katy’.


The next act opens on the film set of African Queen and as the dialogue starts we realise that Jack’s perceived ramblings are not that at all.
Robert Lindsay excels as Jack Cardiff.