The Curious Incident of the Dog in the Night Time 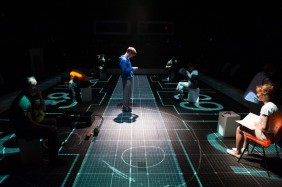 In typical National style, the set was stunning, comprising a huge rectangular grid with mathematical equations scrawled on it, the grid was surrounded by seats on all sides.
Random seats were covered in white canvas and had numbers on them and, horror of horrors, as I neared my seat I could see that my seat was white too! “This is Prime Seat 147” the notice said and I had visions of being hauled onto stage, “not that kind of production” my other half reassured me. I merely had to add up the letters in my name A=1, B=2, etc and if they totalled a prime number I could win a badge. They did, and I did.

So, prime numbers played a major part of the story and so did the dead (although extremely life-like) Alsation, Wellington who had been speared through with a garden fork and lay lifeless in the middle of the stage.

This was the story of  Asperger’s sufferer Christopher (Luke Treadaway), his teacher Siobhan (Niamh Cusack) and his detective work to find out which of the neighbours (Una Stubbs to name but one) killed Wellington.

Christopher hates to be touched even by his parents, he cannot lie and takes everything literally. His social understanding casuses him to behave badly and Siobhan gently but firmly tries to explain this to him. His relationship with his Father (Paul Ritter) is severely tested when he is told that his Mother has died and he becomes even more withdrawn into his own world filled with mathematical logic.
During the latter part of the play Christopher discovers the ultimate betrayal, Wellington's killer and moments of supreme happiness and Luke Treadaway plays each emotion perfectly.

A standing ovation and 10 of 10 from us, and we only give full marks when the hairs on the back of our necks stand up.