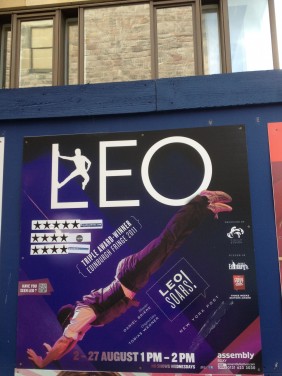 This means that as Leo shuffles on the floor along the stage, he appears standing perfectly normal and upright on the left of the stage, within the projected room. For a riveting hour he acquires furniture, a cat, a parrot, a rug and a fish bowl all drawn in chalk and even has to escape water when the fish bowl in the projection tips over.
He finally escapes through a hole in the bottom of a suitcase which on the right is fixed to the wall, but of course in the projected left hand side room his escape is seen as through the floor.

Beware of a slight nausea if watching the left hand movements only as your brain tells you what this man is doing isn’t normal!!!