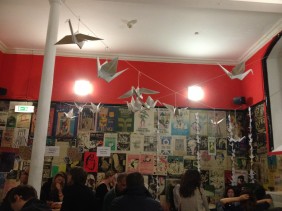 We love this theatre which is in a converted church, even the little café where you Q for the performance is funky and wallpapered with posters of previous performances. This year there were origami birds hooked along the ceiling, all wonderfully mad and fringe-like.

The play was based on a real-life event during the first world war, a group of children were left behind in their French village and they enact their own little battles which are captured on film by an American soldier.

60 years later, the American’s relative is contacted by historians telling him the photos have been discovered. The Play then cleverly moves forward and backward in time to show the scences during the war and then in the photo processing laboratory. The actors, who were perhaps in their 20’s were very believable playing children of perhaps 10 or so.

The Bedlam is being refurbished and it richly deserves investment but we hope it doesn’t lose its quirkiness or enthusiasm for physical theatre.