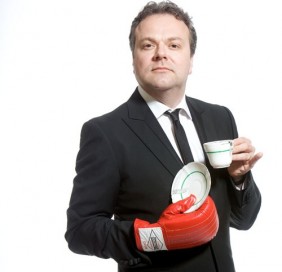 Hal Cruttenden has appeared on John Bishop's Only Joking and Mock the Week but it was at the Edinburgh Festival, in the play Breaking News, that he caught our eye. Cruttenden played a self-important, camp newsreader who ended up being the hero and stealing the show with his diva-like character.

Hal, the stand-up comedian is indeed camp but straight and very funny.

He tell stories of his middle class upbringing in Enfield and of his own kids who think he's gay. In contrast, his wife has a Northern Irish, Ian Paisley accent which scares everyone, including himself.

This was good entertainment and great value for money as there was no cringingly bad support act- just Hal.